Jose Castillo was just a youth kid in 1992, yet he remembers thinking that God was going to do big things through his youth director’s life. He said Terry Maughon had a dream and a vision planted in his heart to help kids connect with God through the great outdoors.

Three years later, Terry started Doe River Gorge. It opened as a summer camp for kids, and Jose later served as a staff member. Eventually, he and his wife, Shannon, got married at the camp!

Jose says that when you go back to Doe River, you instantly remember the moment when God changed your life there. Now, his two daughters attend each summer, and he loves that the same impact that camp had on him is pouring into his kid’s lives too.

Thousands of students find Jesus through this mountain camp
Over the last twenty-five years, thousands of youth have made decisions that redirected the course of their lives. Through adventure camps, festivals, the infamous father/son retreat, school field trips, and more, Doe River is impacting people across generations.

Since 1995, over 5,985 students have accepted Jesus Christ as their Lord and Savior. 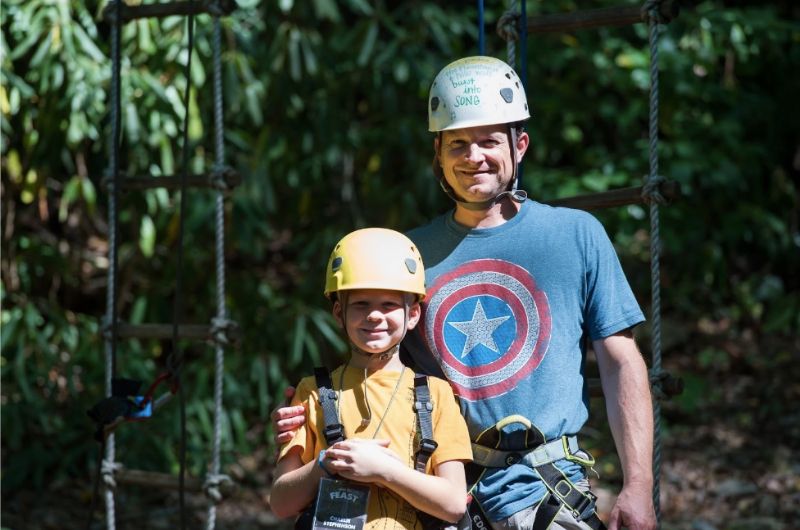 Here are some stories from past staff members and campers:

Serving on the first summer staff

Clint and Lisa Scruggs had a front-row seat to the big dreams Terry, and the team had for Doe River while they served on the first summer staff in 1995. Today, many of those dreams are now a reality, and it’s pretty amazing!

One summer, their daughter visited with them and caught the vision. She graduated the next year and two days later, arrived at Doe River for summer counselor training. Her dad shared that it was the first place where she had a real community. She didn’t feel 1500 miles away from home because she felt so at home with her friends at camp.

Her mom saw their daughter’s faith and relationship with Christ grow so much, and believes God is doing great things at the camp. Clint and Lisa are both so excited to see what happens next for Doe River Gorge!

Kara Ruffin was a camper in the 90s and later worked for Doe River. She says that all of her best friends came from her time at the camp, and she is so grateful for the community it fostered.

Several years later, Kara started working with a day program for people with intellectual disabilities and now brings her students to Doe River for the climbing wall and horseback riding experiences.

Experiencing God with your kids

Toby Roehm attended camp as a high schooler in the 90s, and God used Doe River to make an impact on his life. He recently came back with the youth ministry he works alongside and brought his son with him.

He had the opportunity to reconnect with people at the camp that he had met 22 years ago!

John Teilhet went to the very first summer camp in 1995. Later he served on staff and even went on a mission trip to Costa Rica with Doe River. He shared that the mentorship and friendships he gained from his experiences are incredible.

A girl named Bethany served as a counselor while she was in college. She said that being surrounded by such a solid group of people was pivotal in her life as she was figuring out who she was in Christ and what it meant to follow God.

She met John Teilet at camp and they later married!

Now John’s a PA, and Bethany’s a nurse and their kids come to camp and the couple volunteers. Bethany shared that when you’re part of Doe River, you’re part of a family.

When campers arrive, they are greeted by excited staff members who are ready to encourage them and help them have one of the best weeks of their lives!

Camp is a place where students are valued and nurtured and accepted no matter what. They can be kids and learn about Jesus and what He did for them while having an incredible outdoor experience.

Find out what campers are saying about their struggles and their journey to finding Jesus in this short video. http://doerivergorge.org/video/

While exploring the 600-acre camp, the staff celebrates each student as a special, God created individual. From the train rides into the Gorge, new friends, amazing worship, Bible-based teaching, rafting down the river, and so much more, Doe River’s team empowers students to discover what relationship with Jesus looks like and how to live faith-filled lives as they grow up.